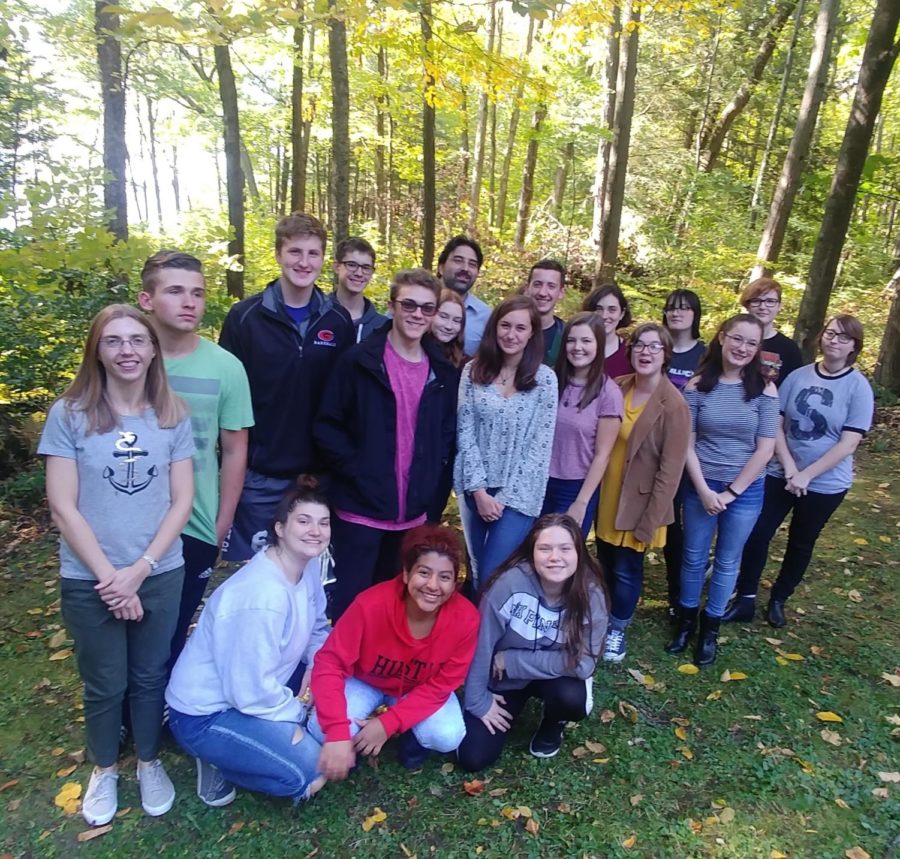 Poetry is to the mind as a warm bowl of soup is to a chilled soul; it nourishes us, revives us, and prepares us for the road ahead. In a 2006 study from the University of Liverpool, researchers observed the human brain in response to Shakespeare. Their data suggests that the language of poetry creates peaks in brain function and helps prevent mental illnesses such as dementia, anxiety, and depression.

On Tuesday, October 9th, a group of BFA students induldged in some “soup” at Share Your Heart, Share the World.

Share Your Heart, Share the World is an event run by the Sundog Poetry Center, a charitable organization that promotes the integration of poetry throughout the Vermont community. The annual event was created three years ago, when Tamra Higgins, the founder of Sundog Poetry, and Jacqueline Kaufman, a retired English teacher, made their idea a reality.

Larissa Hebert, AP Language and Composition teacher at BFA, jumped onboard shortly after the two founders. She has remained invested in the cause alongside Higgins ever since.

“Kaufman handed it over to me. She had started to put together the idea, like the mission statement with Tamra, and when it came to the actual creation of the event, for the first year of it, I was the one involved, working alongside Tamra, as I have since it was started, for that year and then last year,” Hebert said.

Students who attend the event are given the opportunity to meet local New England poets and teachers; spending time and learning with them through various workshops and activities. At the end of the day, the chosen guest of honor gives a master class to all participants. This year’s guest was Chard DeNiord, Vermont Poet Laureate, and co-founder of the New England College MFA Program in poetry.

At the end of the event there is an open mic, allowing students to share their poems in a supportive environment. This, Hebert says, strengthens the confidence young poets have in their work, allowing them to feel pride in their writing.

“I definitely see it as a confidence booster for my students.” Hebert said. “[Share Your Heart, Share the World] helps them find their voice. They’re given the confidence to put pen to page and say ‘I can do this.”

Trace Cushing, a BFA student who attended the event last year. gained the support to recite one of his poems he wrote that day entitled A Letter to Hatred.

“At first he was a little unsure, but then he wrote a poem and he got praised from Rajnii who was the workshop leader, he felt more confident, and by the end of the day he went up in front of the crowd and read his poem.” Hebert said.

Shannon MacDonald (‘18) a former student at BFA who graduated last year, described her time at Share Your Heart, Share the World as a “life changing experience”.

“I will remember that trip for the rest of my life. Everything about it was inspiring. I feel like I learned so much just by being around so many talented people.” MacDonald (‘18)

Kaitlin Emerson (‘20), attended Share Your Heart for her first time this year. She claims the experience changed her writing style and challenged her to bring more creativity into her work.

Hebert says the main idea that she hopes students will take away from Share Your Heart is the true purpose of poetry as not only an art form, but a lifestyle as well.

“Poetry is not just a hobby, nor it is something that collects dust in a book,” Hebert said. “People are actively writing poetry, and making a life out of it. Everything around us is like a potential poem.”

View all posts by Justin Marsh →

This site uses Akismet to reduce spam. Learn how your comment data is processed.

Pick up our latest publication

As seen on "Connect..." with Ryan Spain